Did you used to sunbathe with mayonaise, butter or cooking oil?

We must have been out of our minds......When we were kids, ok, when I was a kid, there was no such thing as sunscreen.  Ok I am lying.  There was 2 kinds of sunscreen, but I wouldn't be caught dead using either one.  One was called Uval - it was extremely bitter and you felt poisoned if you got it on your lips.  First they would turn numb, and the taste, I am sure, was close to hemlock.  Now, Lifeguards were cool, but they were the only ones who could get away with using white zinc oxide on their noses.  Did it work?  Oh yeah.  Would we use it?  Heck no.  It was not cool.  In 1964, Coppertone came out with a self-tanning formula that didn't protect you from the sun, but heck, until you went to bed and it turned your sheets bright yellow, you could delude yourself into thinking that you had a cool tan. 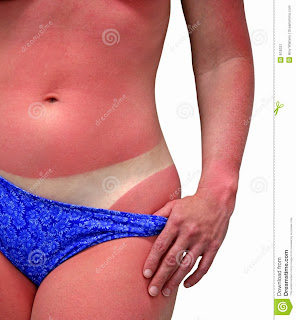 So as you can guess, I have already had many, many spots cut off which turned to Basal Cell Carcinoma because I didn't obey my mother.  Why am I telling you this?  Because, I showed the new Avon Skinvincible to my Dermatologist and her eyes bulged out of her head when she saw that the moisture lotion has 50 SPF.  She said it was the answer to many peoples problems to find the perfect protection against, smoke, temperatures, sun and pollution.  I agree! 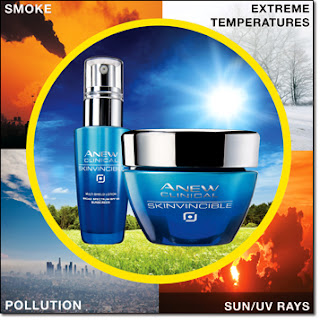 I heartily endorse this product.  It feels good on, it does the job, and has released me from the poorly thought out weight loss therapy called "cut the bad skin off".   All kidding aside, Avon's new Skinvincible has both the night cream with alpha hydroxy acid, which sloughs off the dead skin cells and hydrates the skin, then after washing my face in the morning, I first treat with ANEW Absolute even, which evens out dark patches and dark circles under the eyes to create a pallete of clean, clear skin.  Next I protect my face by using 3 tiny squirts of Skinvincible and cover my face.  It sinks in very quickly and disappears on the skin.  It protects me from smoke pollution, auto and airplae pollution, the 118 head we get here in Scottsdale, and finally, it is a welcome relief to finally have a terrific SUNSCREEN which blocks sun and UV rays.

Ask me for a Sample today - kdaymayday@gmail.com

AVON IS IN THE NEWS THIS MONTH.....
Cosmopolitan: October
Nail Art in Red Hot Lace featured in "$10, Tops!" as a great way to turn a classic mani sexy